The Hare was faster, but the Tortoise won the race. 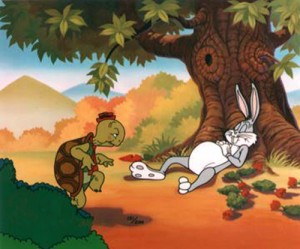 Everyone hates blogging.  Just about everyone anyway.  I, like most, find it hard to get myself “in the mood” to blog.  I probably need to get Dragon, the voice recognition software.  That would probably take some of the intimidation out of it.  But this is probably the most important part of the process because it’s easy to forget, get lazy or just give up.  This race is a marathon, not a sprint, so it’s easy to become discouraged.  The rewards sometimes don’t come for quite a while and it’s sometimes hard to see the light at the end of the tunnel.  But blogging really is a good way to advertise your business.

Before the Internet advertising was more of a shotgun blast approach where you threw money against the wall and hoped 3-5% would stick.  It was an easier method that didn’t require much of your time, but did cost a lot of money.  Then the Internet changed the way we advertise and in such a great way.  Instead of marketing to a general audience we advertise to targeted markets.  People search for you and self-qualify themselves by the words they type into the search engines.  This translates to lower cost advertising with better results because money is spent only on advertising to people that are interested prospects.  Sounds great right?

Not so fast.  Most people are thinking “I don’t want to blog.”  So the problem has arisen with this new advertising model that people are lazy!  Cut and dry.  Every business owner wants to get to the point where they don’t have to do anything and the business runs itself.  It’s the American Dream.  But the problem is 90% or so of local business leads come from the Internet.  So a business owner should spend 90% of their lead generation budget and time on building their Internet presence.  If your business is doing well and you’re not advertising on the Internet think about how much business you’re not getting.

You might think, “why not hire a ghost writer?”  Not so fast.  The quality of the content is very important so you can’t just hire someone to write about your industry.  They don’t have your expertise and knowledge.  It might work for a little while but not very long.  The search engines can tell if people like the content you put out so it’s important to make your articles interesting, helpful, educational, etc.  Your knowledge and expertise will keep you on top of the Internet longer than anything else so don’t cheat or cut corners.

Most of all don’t get lazy.

Put a task for blogging on your calendar.  Schedule it in and think of it as part of your job description.  Don’t title it ‘blogging’ title it ‘lead generation.’  It sounds better and reminds you of why you’re spending the time blogging.

Also, consistency is key.  Frequent, consistent articles at least once a week are best.  Sometimes when business is going well it’s easy to get lazy and take a nap under the tree like the hare in the image.  That’s when the tortoise sneaks up on you.  If you’re consistently blogging and still aren’t reaching the top you might need an Internet Marketing Company who can transform you into the hare.  There are ways to build a website and promote yourself on the Internet that can give you an advantage over your competition and make you more like the hare.

Then all you need to do is not stop.

A good example of what happens when the hare doesn’t stop is a sign company in the San Francisco Bay Area, Signworks, Inc (http://signworks.us.com/).  They have a website that is built for ranking on the search engines.  They’ve been consistently blogging articles about the jobs they work on at their website as well as on CityScoop.us, a local business news website.  They have a powerful website and link building tool which makes them like the hare.  And they haven’t stopped blogging either.  As a result they rank for just about every industry related search in their area, the East Bay Area.  It takes time but when you build a presence like SignWorks has you get leads.  Over time you build up a portfolio with pictures of your work.  And that is what ultimately sells your prospect.  When someone searches for “sign company east bay area” you find SignWorks.  People trust websites that rank at the top and it does help motivate the prospect to buy, but it’s not until they see your work with their eyes do they become truly motivated to hire you.

To sum it up, most new business comes from the Internet.  Blogging gets you to the top without paying a fortune.  Start now and don’t stop because there is no end to this race.